This article is a stub. You can help by expanding it. 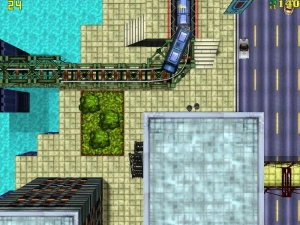 Rail transport is a part of public transport system used across the entire Grand Theft Auto game series. It was first introduced in GTA 1 as high-speed rail. The player may enter a train at a station and travel around the city. The train is controlled by game logic, however the player is able to take control of the train and its speed. If the train controlled by the player collides with another train, both immediately explode.

Earlier games does not intensively use trains for the player activity. Beyond that there is lack of rail transport in Vice City. Things changed since San Andreas, when the first missions involving trains were introduced, such as 'Wrong Side of the Tracks', 'Snail Trail', 'Green Goo'. There is also a side mission where the player transports freight around the state under a time limit.

This section is incomplete. You can help by fixing and expanding it.

This section is incomplete. You can help by fixing and expanding it.