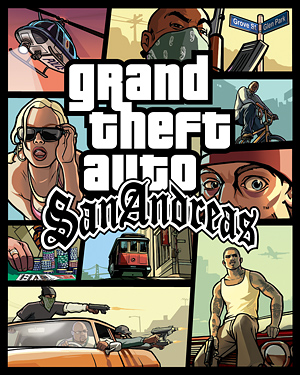 Grand Theft Auto: San Andreas is an action-adventure video game developed by Rockstar North and published by Rockstar Games. It is the seventh game in the series and is the sequel to 2002's Grand Theft Auto: Vice City. It was first released for PlayStation 2™ on October 26, 2004, and on June 7, 2005, for XBOX™ & Microsoft Windows. Later on June 30, 2015 & December 1, 2015, a remastered version was released by War Drum Studios both for XBOX360™ & PlayStation 3™ respectively.

This category has only the following subcategory.

The following page is in this category, out of 201 total.