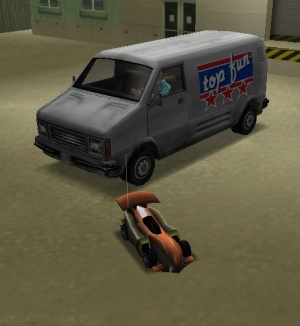 Remotely controlling an RC Bandit from a Top Fun van in Vice City. 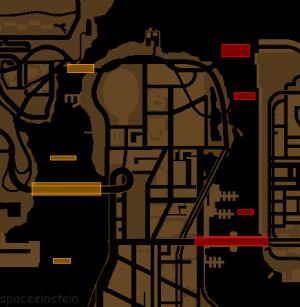 Zones where the RC Bandit will immediately explode in GTA III.

This opcode spawns an RC Bandit and gives remote control of it to the player. The RC Bandit model must be loaded using opcode 0247 or else the game may crash. The opcode is intended to be used while the player is in a vehicle. When used as intended, an RC Bandit is created at the location and the camera and controls will refocus on the Bandit. The player character is not controllable while this is happening. The controls for the Bandit are the same as a car. The Bandit can self destruct by pressing button 17 (ATTACK key) or by colliding into the wheel of any vehicles, both of which can be disabled through opcodes 048A and 04D6 respectively. The explosions are considered part of the player's action, so you can gain wanted levels through the destruction of the Bandit. The player is not immune to the Bandit's destruction. After the Bandit is destroyed, the camera fades and refocuses the camera and controls to the player. The Bandit is then removed.

In GTA III, there are zones where the RC Bandit will immediately explode. They are all located inside tunnels or on bridges. As it explodes, a message with GXT key HM2_5 ("Out of range!") is displayed before the camera fades as usual. This occurs regardless of range.

A whole set of problems arise when using this opcode past its intended restrictions. Although not recommended, if the opcode is used while the player is on foot, the player is fully controllable while controlling the Bandit. The player can even enter and drive other vehicles while controlling the Bandit. Controls for the Bandit is different when on foot than when in a car. In GTA III, if the player gets killed while in RC mode, the player will remain in RC mode after respawning. If the Bandit is also destroyed while wasted in RC mode, the camera position will remain stuck. Using this opcode while already in RC mode will detonate the recently created Bandit while leaving the previous Bandit alone.