Ok, the goal of this tutorial is to change a car's general colors in VC without having to download pre-made mod from the web. Small details such as headlights or any signs on the vehicle will not change color. The only thing that will change color are sections that span over the vehicle.

So, we will be changing an ambulance's colors as an example. First off, I must make it clear that this tutorial goes a bit into the field of C++ game programming. You will be modifying a data file that makes up the game's structure. If you make a mistake, it could possibly interfere with the game. Also, I insist that you view the pictures that come with this tutorial, hence the fact that you will mess up if you don't.

1. The file you will be accessing is called carcols.dat, located in C:\Program Files\Rockstar Games\Grand Theft Auto Vice City\data. If you cannot find this folder, simply search for "carcols.dat" on your computer.

If this is your first time open a DAT file, then you will be prompted to choose which program to open it with. Choose Notepad from the list and hit OK.

2. After opening the file, maximize the window. Scroll down a bit until you get to somewhere that looks like this (Note: the red text was added by me and will not appear on your computer):

3. What you should be looking at now are three columns of text. This is the color table Rockstar conviniently made for us. It is composed of three columns;

Please do not touch anything on this table, as it will modify the game in the wrong way.

4. Now, scroll down a bit more until you reach the end of the color table and stumble into another one. This is the cars table, with two columns.

The first column simply has a short indentifier of the car and then comes a comma (,). After the comma, you will be in the next column, which contains numbers seperated by commas once again. 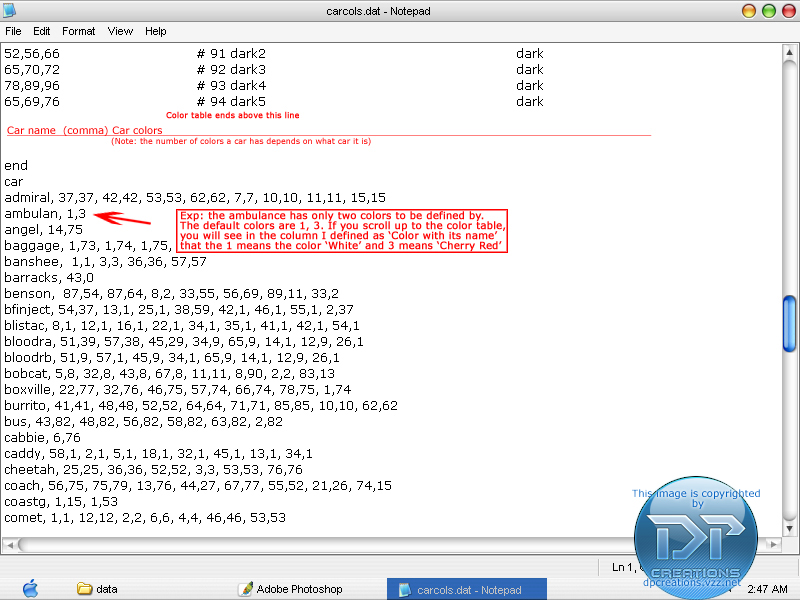 5. Ok, now I will show you an example of the ambulance. The ambulance consists of two main colors: White (1), and Cherry Red (3). We will be changing these values to our preference.

6. To change what these colors will be in the game, we must simply change the values to what we want. Lets say you want to replace the white color with a dark blue. Since dark blue is defined as the number 4, you replace the number 1 (which means white) with the number four.

Now you could change the ambulance's red coloring into a light blue. Just as with the dark blue, we must find the numberical value that represents light blue in the table. In this case, its the number 59, so change the 3 (which means red) into 59.

You have now successfully modified the game right from your computer. To see the effects, run the game and find an ambulance. You should see your changes immediately. Feel free to experiment with other cars and different colors until you get what you want.