Difference between revisions of "CheatDevice (LCS)"

CheatDevice by Edison Carter is the first trainer for Liberty City Stories. 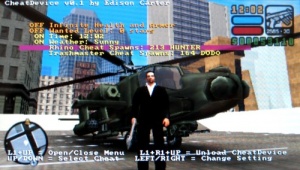 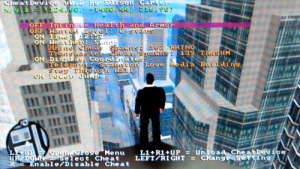 You need a UK/EU/AU or US version of GTA LCS. The German version is currently unsupported.

All CheatDevice features work on PSP firmware 2.0, 2.01 and 2.5. I think the only feature that doesn't work on 2.6 is the ability to view battery level, voltage and temp. DO NOT INSTALL firmware 2.7! Cheat Device will never work 2.7 firmware.

Yes, the Hunter is in the game! To fire the chain gun, press SQUARE+X. Be careful with the spawn choices, some stuff like RC toys and boats will crash the game. Someone reported that boats might not crash if you're near water, so that needs to be explored more.

Teleport works whether you're on foot or in a car. If you're in a car, I had to make it stabalize it for a few seconds or else it would often get tipped over or flipped around. It stabalizes for 2 seconds teleporting within an island, 18 seconds going from island to island. If you're parked on a slant, it's kinda interesting when you come out of teleport.

I added teleport locations for well known landmarks and mission pickup locations. I haven't finished the Shoreside Vale missions, so those may not be complete. I didn't include teleport locations for the insides of the safehouses because you just fall into nothing unless you're teleporting from there. It seems once you leave the interior, it goes away. They do appear to be located inside their buildings where they are represented to be.

Instead of walk through walls, I'm doing step through walls. Go up to a wall facing it and go to the menu and press X on Step Through Wall. It'll move you 1 meter forward. You can do a fun standing walking thing if you hold X down. (was there a music video that had this in it?)

Power Jump allows you to fly around using the jump button. Press and hold SQUARE to jump and keep jumping, then pump the SQUARE button to stay level. I added a little forward velocity to keep you going. Feels a lot like the Matrix jumping from rooftop to rooftop this way. It does have the power to shove you through a roof if you want to walk through ceilings. This gives you the ability to explore everywhere, inside buildings and above the height limit. A lot of buildings are not solid above a certain height. The one I'm standing on in the picture I think is the highest solid building.

While you have a vehicle spawn line selected, just press the last button of the cheat code, either CIRCLE or L1, to spawn things. Check the instructions at the bottom of the screen for which button to press. CheatDevice copies the rest of the cheat into the button history buffer to trick the game into thinking you entered the whole cheat.

Screenshot saves a BMP of the screen to the /PSP/PHOTO directory where you can view it from the PSP's photo viewer. The files are numbered sequentially. The numbering starts over at 1 again when you restart CheatDevice, so be aware it'll be overwriting your previous screenshots. The screens were coming out much too dark originally, so I added an automatic brightness adjustment.

To take a picture, go to Screenshot and press X twice quickly and carefully. You may have to press it a third time if it doesn't trigger. I needed a trigger that you wouldn't accidently hit easily, but also wouldn't use a button that would reset the camera or make you jump or move or change anything on the screen, which most of them do. I tried to slow down the game as much as possible while it's copying the screen, but you still need to hold still to keep from messing up the snapshot.

You can edit the colors of the car you're driving. The stripe color only applies if the car has a stripe or two tone second color. Special vehicles like taxis and gang cars that do not change colors when resprayed can not have their colors changed.

Toni was never as good with motorcycles as CJ. He just falls off too easily to have any fun. Problem solved.

Your Car Is Indestructible makes any car you get in indestructible, even after you get out. If flipped over, it'll stay that way like a turtle on its back and not catch fire. You can flip it back over with grenades. This effect does not last through a garage save, and cars can still get visible damage as usual.

Your Car Is Always On Fire makes your car stay on fire all the time without exploding. Once you get off, the clock starts ticking, so get away or get back in fast!

No Reload works for handguns, smg's, assault rifles, sniper rifles, and rocket launchers. The rocket launcher has the added bonus that if you keep holding the trigger, you can keep firing after you run out of rockets.

This version lets you change your CPU speed between 222MHz and 333MHz. You can also see your battery level, voltage and temp. This feature is not available on firmware 2.6. The syscalls are all mixed up on 2.6 and it would be prohibitively difficult to discover the CPU and battery stuff on 2.6. Of course the battery life will be shorter if you play at 333MHz.

Video Recorder records an animated GIF at 8 frames per second. I think it may actually be better to stay at 222MHz for video recording. The CPU time starvation on 222MHz helps slow down the game and hold the screen still during the screen captures.

Don't forget to press DOWN+X to stop your video before taking the memory card out!

The GIF file generated is uncompressed. To compress it, load it into anything that can load animated GIFs and then save. Compression reduces the filesize by better than 50%. Always compress the GIF before posting on the web, and limit the length of your recordings to keep the size reasonable!

The Heavy Bike cheat determines the mass of motorcycles when they are first created, like when you open the garage or when you first see one in traffic, so you need to turn it on before opening the garage or finding a motorcycle you want to ride. Once a motorcycle is created, its mass property is set. Other motorcycles on the road will also be heavy, but for peds, their motorcycles burst into flames at the slightest touch of another vehicle. If you don't want this, get yourself a heavy motorcycle then turn the cheat off so new motorcycles will be normal.

With this cheat, you are the heaviest thing in the universe and in every collision, the other vehicle has to do all the moving to get out of the way. If you shove a car into a wall, it has nowhere else to go so it'll squirt up into the air like the Yardie Lobo in my video.

If you don't turn on Your Car Is Indestructible, you get a cool flame effect when you crash into walls.

I left the Dodo more realistic. If you pull back too much on the stick, it'll stall and descend. Like a real plane of this type, you can't climb too much too fast without losing too much speed. I think this was the amount of power they intended it to have because with more thrust it has a bad noseclimb problem.

I made some more optimizations to the video recorder. It's a little faster now.

Gameplay Speed is the same thing that's controlled by the Faster Gameplay and Slower Gameplay button cheats. In LCS, gameplay will only speed up as much as the CPU can keep up, so it usually doesn't achieve full 2x speed, let alone higher speeds. 333MHz can help that. It also won't go slower than a minimum speed.

Walking Speed makes you move faster on foot. 2.5 is a good choice for quicker walking. Higher values can be hard to control and work like walk-through-walls. You can moonwalk by setting a negative value.

With Bikes Can Drive on Walls, whatever direction the bottom of your tires is facing is the direction of gravity for you.

You can now set gravity to any amount you want. The gravity setting persists after CheatDevice exits, so you can enter multiplayer with modified gravity. Press X to turn on the button control up=reverse.

Freeze Everything works like it did in San Andreas.

Gravity and Freeze Everything don't always apply to all vehicles, only aggressive drivers and cars you've touched. You can use this to simulate the Bubble Cars cheat from San Andreas. With zero gravity, cars you touch float away. Bikes Can Drive on Walls gives you your own personal gravity on bikes, while everyone else is subject to zero gravity. You'll probably also want Heavy Bike to make it more fun.

If you want Gravity and Freeze Everything to apply to all ped vehicles, use the Aggressive Drivers button cheat (SQUARE, SQUARE, R1, X, X, L1, CIRCLE, CIRCLE).

The Cheat Maker feature is only intended for programmers and skilled cheat developers. You can screw things up in innumerable ways if you don't know what you're doing.

I added the ability to turn your motorcycle in the air while using Rocket Boost.

For tips on using Construction Mode, see this thread.

When you enable Construction Mode, it doesn't become fully active until you close the menu screen. Use the arrow buttons and analog stick to move around. You can move faster by holding X. It can be easier to see what you're working on if you use L1+LEFT to zoom out.

Here is a list of known object IDs. Objects usually take a couple seconds to appear. If you move too far away from where the object was originally created, it may become invisible. Holding R1 will usually make it appear again.

Please try to limit your use of the large video recorder. The videos generated are huge to download. For technical reasons, it is not possible to display the instructions during full screen video recording without the possibility of it getting into the video, so you'll just have to remember that X+DOWN stops the recording.

RCGOBLI, RCRAIDE, RCBANDT and "tiny invisible heli" are all drivable now thanks to Vettefan. If you take the invisible heli to a pay 'n spray, it'll become visible and you can see it's the police heli that chases you when you have 3 stars.